I was recently shooting a wedding (no surprises there) when an avid amateur photographer came up to me saying he loved our work & the blog especially and asking a multitude of equipment questions ie why I didn’t carry loads of gear, bags etc, well fast forward to when Jane & I arrived at Jen’s house on the morning of her wedding to find what can only be described as a full salon in her house. The most amazing set up with huge mirrors, lights, a spray gun & pots of brushes, the full works, it made for great images, even though I had one eye on Jane measuring up one of the light booths & really panicked when I saw her with the shoes!.
Neil & Jennifer’s wedding at the glorious West Tower was always going to be special, so much preparation, two great families & a great looking couple. So much detail in the er details as Jen (being an architect) had made a scale model of the room as a seating plan with tables named after important years of their lives.
In posting this blog I started to think of past weddings & how spoiled we have been with a great year of beautiful people and locations & it has to be said, with the Christmas weddings approaching & some great weddings to come, what a great job I have. 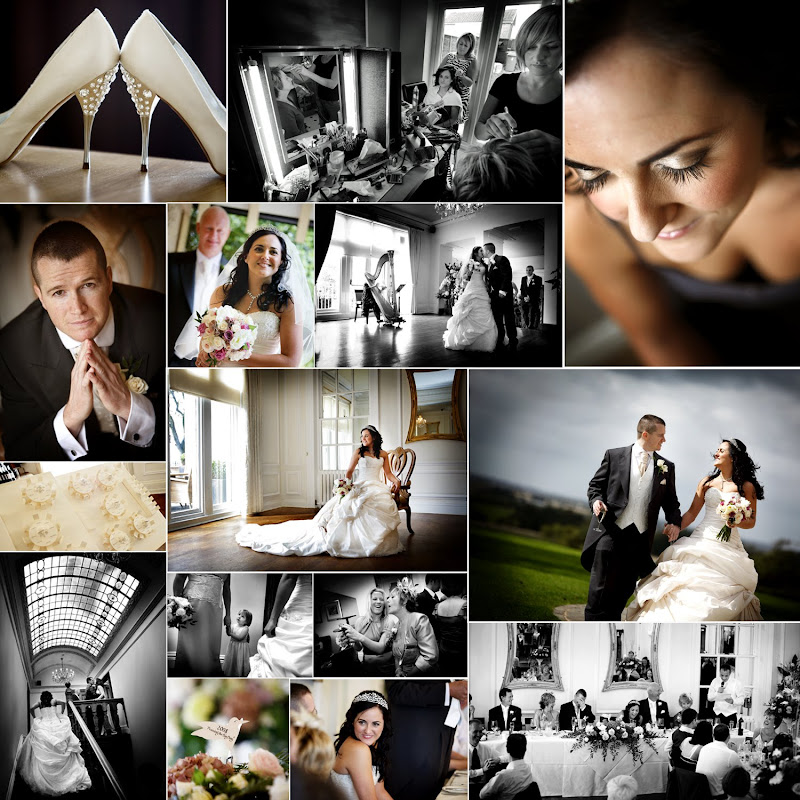 Thanks to you both for the fun, the smiles & to witness true love. It was a joy.D.
No comments:

One of the joys of my job is the ever changing challenges that confront me on shooting weddings, take Scott & Michelle’s wedding when I arrived in the morning to shoot Scott there was wind & drizzle (for my London friends it was SPITTING!!!!!) on arrival at the beautiful St Wilfrid’s church in Standish dull & windy, during the service the most torrential downpour then leaving the church glorious sunshine. No matter what the weather Scott & Michelle smiled throughout the day for a rather special, emotional wedding.
The reception was held at the impressive Rivington Barn this place really does come to life for weddings with great service, atmosphere & food. Great speeches preceded the evening celebrations where we caught up with a few of our previous Bride & Grooms including Damien & Louise Read who’s wedding we shot last year (It was this wedding that won Jane her award at the beginning of the year) but with a little baby boy, how cute!!!.
The evening partied on with a touching dance from the newlyweds & then the dance floor filled with the first gig by Scotts dads band ‘in da loft’,a great day. 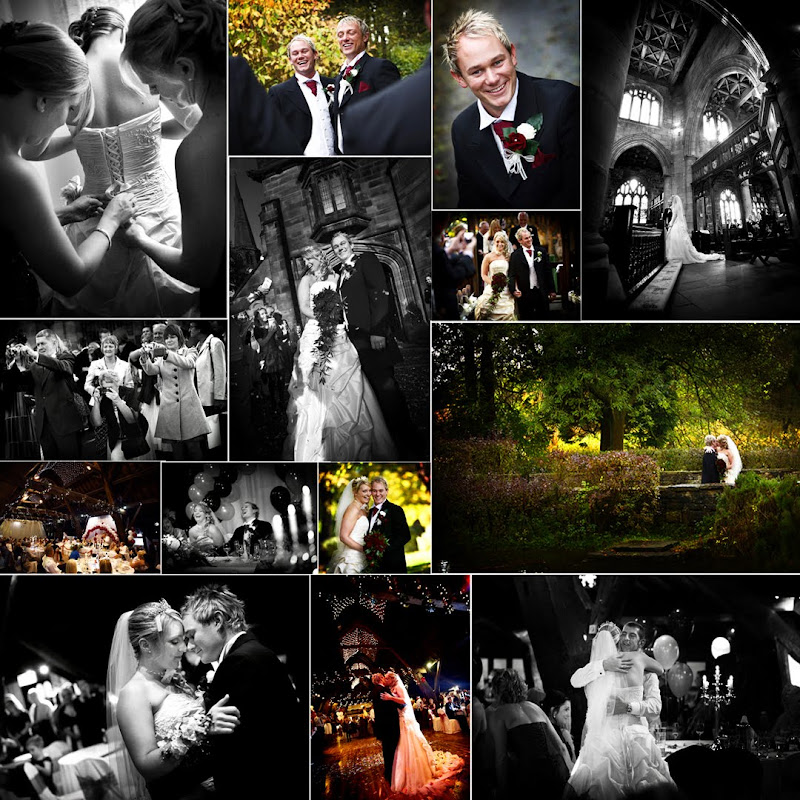 Thanks for allowing Jane & I to witness your special day, your love made for some special images,see you after the honeymoon.D.
No comments:

After hitting the road for our previous weddings Lee & Louise’s wedding made a refreshing change as our journey took all of two mins to our own church of St Andrews in Wigan, infact you can see the church from our studio. A few years ago we photographed Lee’s brother Scott when he married Joy and it was at this very wedding that Louise first met Lee & as they say the rest is history.
When Jane & I arrived at Louise’s house we were met with a stunning dress, the colour pink everywhere & a fog of hairspray (hairdressers must have a reduced lifespan).Lee arrived very nervous but this was understandable as ALL of Springfield had turned out for this wedding there wasn’t an empty seat in the church.
One of the best things about weddings at this time of the year is the autumnal colours & the gardens at Kilhey Court didn’t disappoint and made a stunning backdrop for an fabulous couple and a WOW dress. Now after the tears had been flowing all day there surly wasn’t any left for the speeches but no as Dad revisited the past again tears flowed all toped of with a funny speech by the bestman.
Great colours, great fun, great people & wow what a great dress. 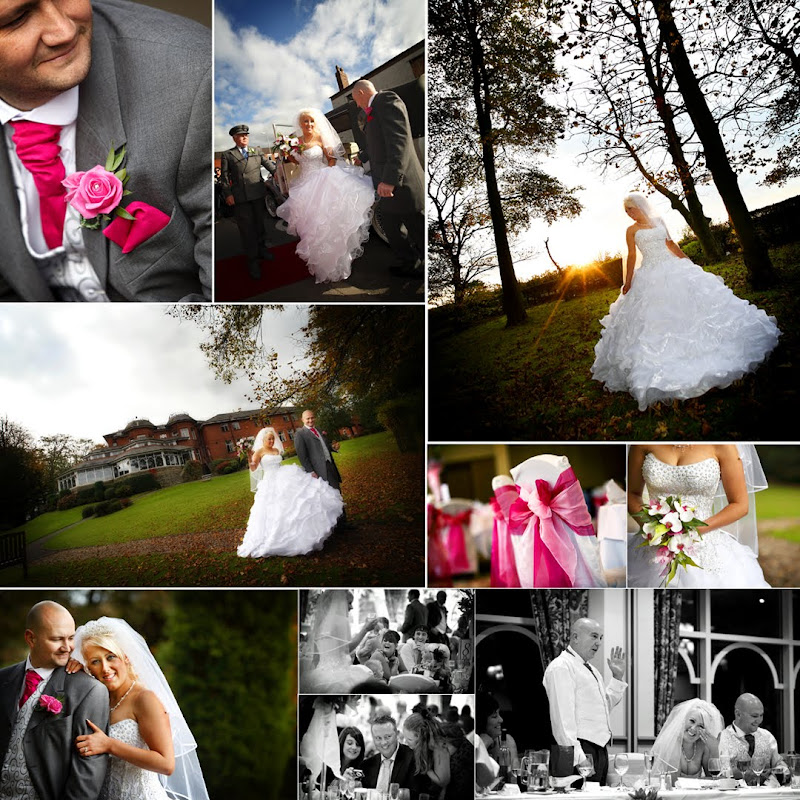 Have a great honeymoon.D.
No comments:

Having met Tony & Karen to discuss their wedding previously in the studio I suspected that this wedding would be a little on the crazy side, and wasn’t disappointed. As Jane & I arrived the girls were in various states of make up in matching dressing gowns & matching spirits already being filmed by the famous or is that infamous Mike Roberts videographer extraordinaire (that must be worth a tenner).
On arrival at the church the ‘lads’ were calming themselves in the nearby Swan pub, and dancing from the pub to the church the ‘crazy gang’ arrived. St Oswalds at Winwick is as gorgeous outside as it is inside accompanied by a really friendly vicar, good times.
After an emotional ceremony we all left to continue the fun in the marquee at the Thistle Hotel in Haydock for a wedding breakfast with a difference. Tony & Karen had opted for a fantastic singer Paul Guard to entertain during the meal & boy did he entertain, at one point all the guests were up dancing, singing just letting themselves go.
Our coverage ended with again great speeches from all, to say this wedding flew was an understatement it was as expected crazy. 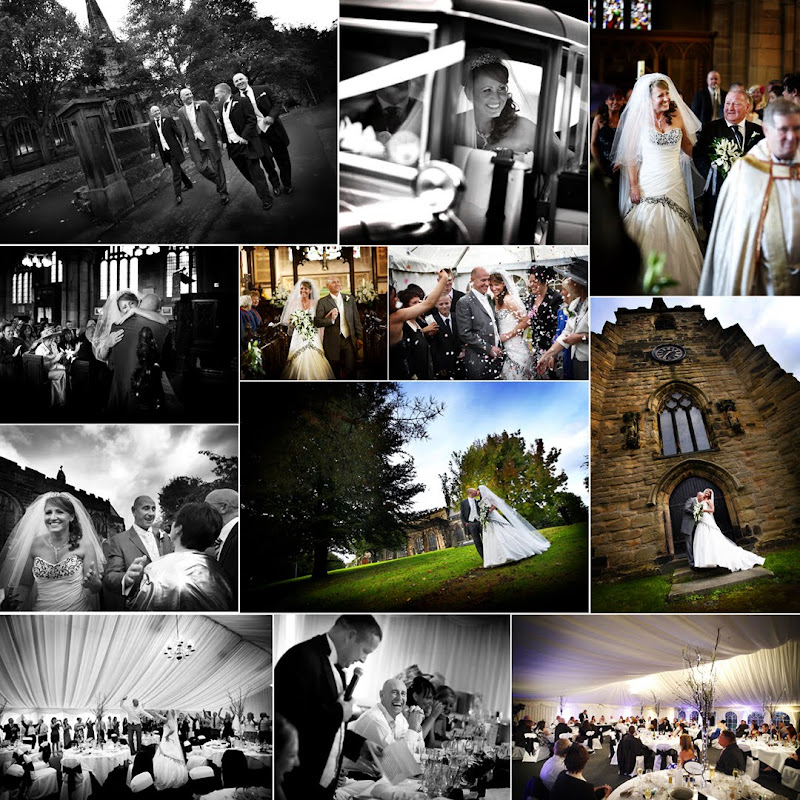 Well, its back to normal after having had the most amazing night at the Hilton Hotel overlooking the river in Newcastle. It was an honour to be at the British Professional Photography Awards It’s always surreal being at the awards surrounded by some of the biggest names in photography and my images are amongst them in the final shortlist for national awards.
It’s always a bit weird when the host says “and here are the nominees” and then you see your image 20ft wide on screens above the stage. Weird but somewhat exhilarating!
We also had the privilege of being invited guests of the world’s largest album manufacturer, Graphistudio , who produce many of the wedding books that we’re lucky enough to create for our Bride & Grooms along with some old friends of ours –Paul & Sarah Wilkinson.These two are a great laugh and closer ties between our businesses were sealed in the early hours.(what a moment MDs of multi national camera companies/album manufacturers/computer giants & us crashed out with bow ties off and a table full of drinks laughing the new day in, a memory that will last forever)
We were up for UK Parent and Child Photographer of the Year and UK Wedding Photographer of the Year, but it wasn’t to be this year, but, hey, who wouldn’t be pleased with being runner-up in both categories, yes RUNNER UP in the most prestigious awards in the UK.
So here’s to next year & a full year of being the Buzz Aldrin of the photography world (still cant complain there was over 2000 entries) 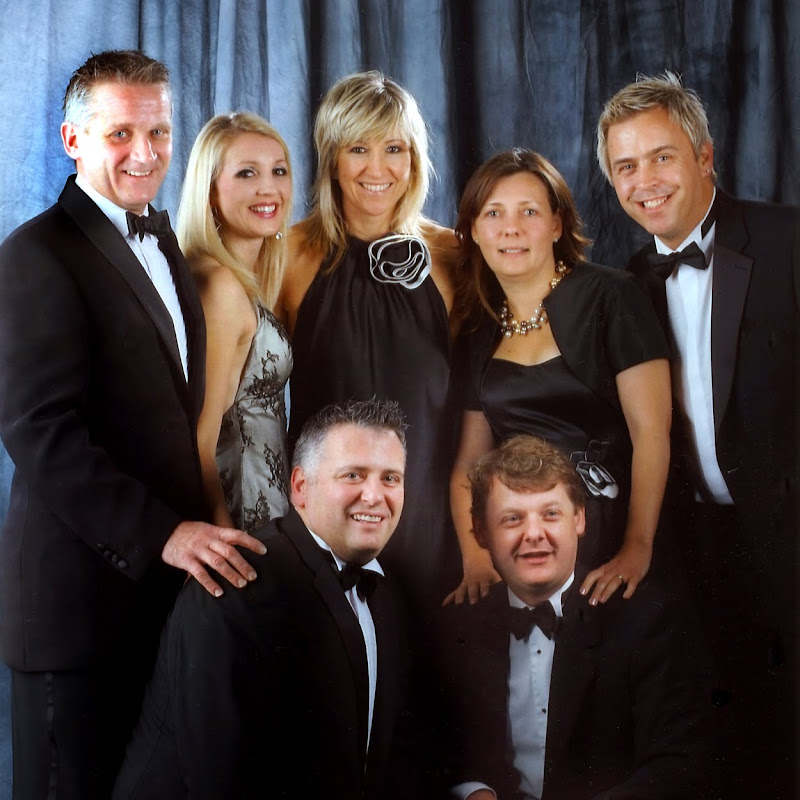 The image is of Jeremy Price & his partner Jane & Martin Baynes from Graphi Studio, our good friends Paul & Sarah Wilkinson & me & the boss!great times.
1 comment:

Well this surreal year just keeps continuing & the 2009 BPPA (British Professional Photography Awards)are taking place this sunday (11th) at the Hilton Hotel in Newcastle, these are called the photo industry 'OSCARS' and in the preliminary judging we had the honour of being awarded 5 Certificates of Merit,3 in Wedding Photography,1 in Studio Portrait Photography & 1 in Parent & Child Photography. These national awards are in recognition of skill & technical ability in the Master Photography Awards a true honour,but then my mind was really blown when I found out that I had been shortlisted for the UK Wedding Photographer of the Year AND the UK Parent & Child Photographer of the Year this really is beyond my wildest expectations, I thought the highpoint was the regional awards but this just puts the 'icing on the cake'to a memorable year.
So on sunday both Jane & I start the journey to Newcastle for the black tie event (as I post this blog Jane is posh frock shopping!!!) the end of a crazy week that started with both of us meeting the great photographer that is Yervant in London, then published in a national magazine then ending with the national photo awards,all this for just having fun & pressing a button (yes that what my friends say I do????).
Fingers Crossed.........
1 comment: 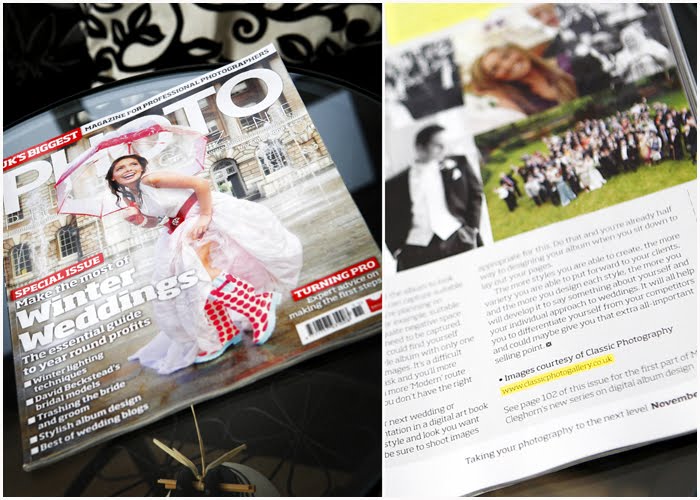 We were approached a few weeks ago by my good friend Mark Witney regarding using our images for an article he was writing for the November issue of the UK's biggest magazine for professional photographers regarding album design & presentation,why? because our images just worked in albums & had the WOW factor that the readers where looking for.A real honour & the first of many. 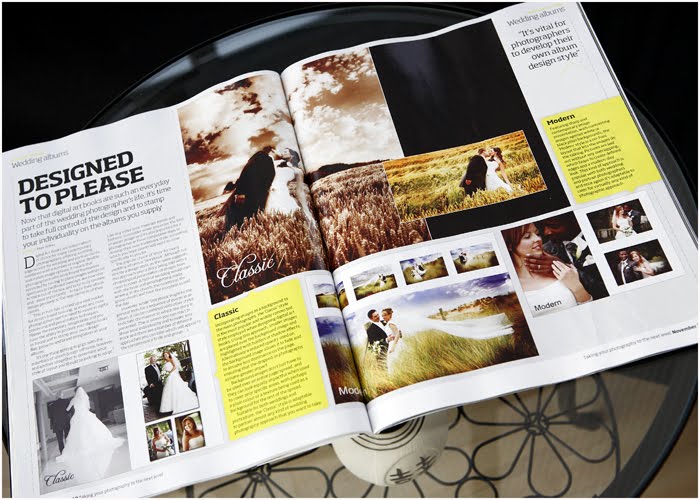 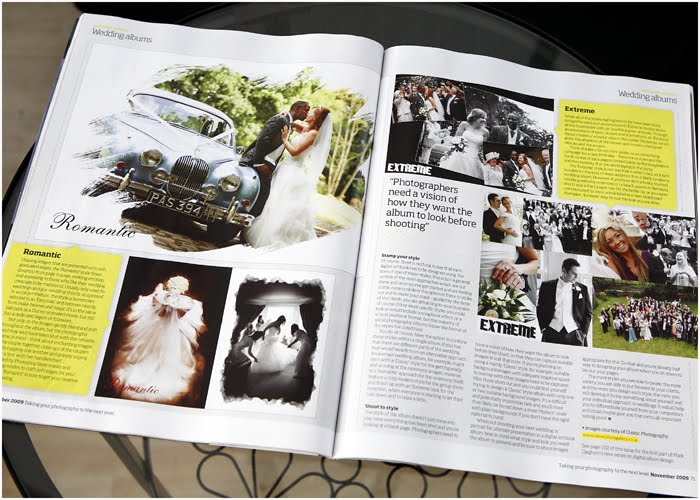 On sale at all good newsagents....I think that's what they say!!!!!
No comments:

Last week Wales came to us & this week we went to Wales, to the beautiful town of Llangollen. This was like going back 100 years driving past the old rail station with the steam trains getting ready to leave crossing the stream to get to the church that sits right on the riverbank. Now the day didn’t get off to the best of starts, shall we say there was a lot of welsh mist (pouring rain) & Jon had spent many painstaking days on restoring a vintage VW split screen camper but as we saw him pushing into the car park & not best pleased we sensed a problem. During a gap in the rain Katie, Megan & the bridesmaids arrived in a second VW Camper & a very personal & emotional ceremony followed. Now the camper was a surprise for Katie but unknown to Jon during the ceremony the lads had managed to fix & get going Jons Camper & arrived with cheers at the church, and bang on queue out came the sun.
We had previously found the most spectacular location for the photos, Valle Crucis Abbey near to Llangollen this was amazing, & in the warm sunshine I really, REALLY, got carried away it was just one of those weddings, don’t ask why, it could be the location, the couple, the fact that instead of traditional wedding flowers there were herbs & old English flowers, or just that for ages I had watched, with a little envy, our good friends Andy & Agnieszka Younger from Younger Photography in Plymouth shoot these fantastic, photogenic campers & secretly I always wanted to, & now I have. 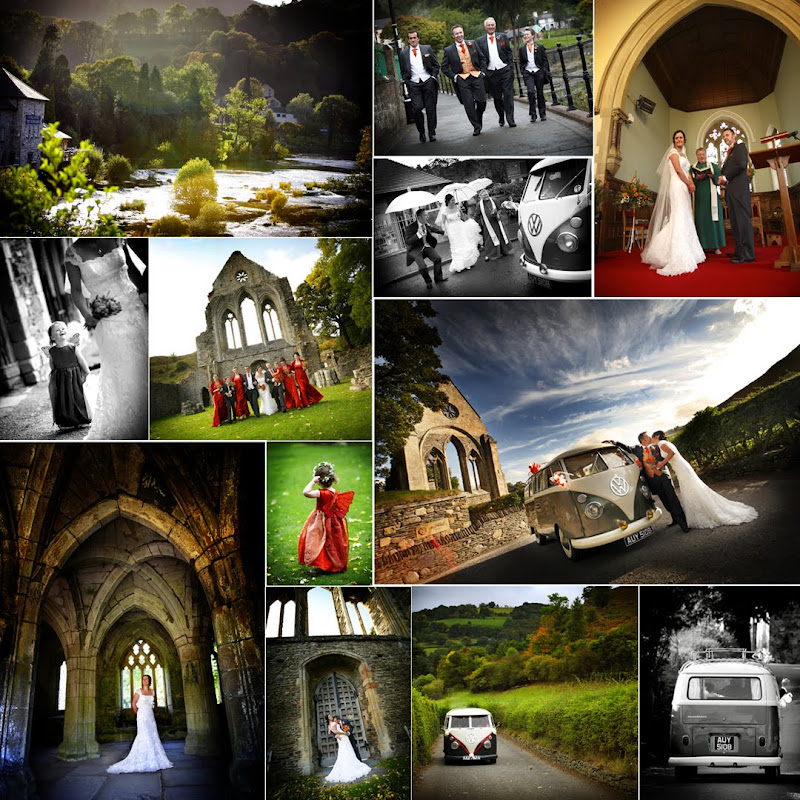 Thanks To Jon & Katie on Honeymoon in a beautiful VW Camper, somewhere…..
3 comments: